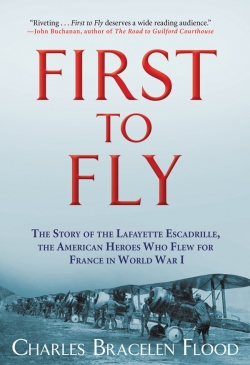 "The word “legendary” is overused in military history, but it is almost an understatement for the Lafayette Escadrille. Flood (Grant's Final Victory: Ulysses S. Grant's Heroic Last Year, 2011, etc.) produced a string of memorable histories before his death in 2014. This one centers on a cast of characters as wild as any in fiction. The Lafayette Escadrille was made up of American volunteers, pioneering fighter pilots at a time when flight itself was still in its infancy. The squadron had a core of rich Ivy Leaguers, but its members came from all backgrounds, including an Alaskan dog trainer and a couple of cowboys. Few of them had ever flown planes. They drank heavily, enjoyed the sexual favors of numerous willing Frenchwomen, had a pair of lions as mascots, and wore a variety of nonregulation uniforms. They flew combat missions in flimsy wooden planes against better-trained and -equipped German pilots. Miraculously, some of them survived their first dogfights and went on to become aces. From the founding of the squadron to final armistice, 27 of the 38 men who flew missions survived. Flood tells their stories, based on their own accounts, with more emphasis on the personalities than on tactics and strategy. One of the most colorful was Bert Hall, a gambler, womanizer, and part-time spy whose memoirs provided plentiful—if sometimes self-aggrandizing—material. A more modest flier, Edmund Genet, was a deserter from the U.S. Navy who kept a detailed diary before dying on a mission in 1917. Flood also draws on German sources, giving us glimpses of the war as seen by the likes of “Red Baron” von Richthofen and Hermann Goering. While the author doesn’t always provide dates—perhaps that’s too much to ask with such an undisciplined unit as his subject—his portrayal of the fliers and the crazy life-and-death world they lived in is priceless. Top-notch military history. "