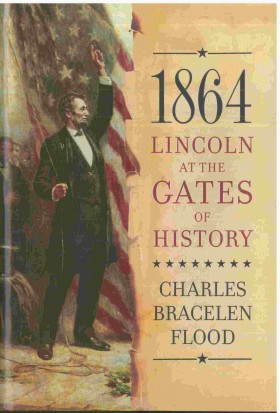 "1864 is a masterly re-creation of the last twelve months of Abraham Lincoln's life. This brilliant book re-creates the tense drama of the final days of the Civil War and presents a moving portrait of the president in his final hours of triumph and tragedy. This is a biography that is also first rate history."
— David Herbert Donald, author of Lincoln

"What makes 1864 so moving is that Flood makes us see Lincolnas Walt Whitman did - as a man of 'conscience and honesty and homely shrewdness' - as a miracle worker who was intensely human."
— Evan Thomas, author of Sea of Thunder

"It was the crucial year, one that changed everything, and Charles Bracelen Flood has written a captivating history of 1864, and of the vivid characters whose lives shaped the American future. For readers who want to know why we are the way we are, this is a terrific book."
— Jon Meacham, author of American Lion: Andrew Jackson in the White House

"Charles Flood sees through Lincoln's eyes with unflinching clarity during the only year the Civil War actually might have been lost. The reader is literally compelled to re-live the suspense as the terrible events unfold."
— Winston Groom, author of Shrouds of Glory and Forrest Gump

"A gripping and scholarly narrative. No one can again claim to comprehend Lincolon or the final year of the Civil War without reading this essential book."
— Harold Holzer, author of Lincoln President-Elect

"Watching this exhausted man face-to-face with the bloodiest war in our history and a nation still deeply divided about slavery, somehow finding the courage and faith to seek reelection, is a unique reading experience. You feel in touch with the essence of America."
— Thomas Fleming, author of The Perils of Peace

"A deeply affecting portrait of Lincoln at his finest - willing himself past his sorrows and doubts, exhorting his army to a decisive victory, and summoning the country to a magnanimous peace. Charles Bracelen Flood's 1864 is a stirring reminder that Lincoln, with his forbearance, humility, and above all his charity, was indeed one of the better angels of our nature."
— Patricia O'Toole, author of When Trumpets Call

Lincoln at the Gates of History

In 1864: Lincoln at the Gates of History, the reader is plunged into the heart of that crucial year as Lincoln faced enormous challenges.  The Civil War was far from being won: as the year began, Lincoln had yet to appoint Ulysses S. Grant as the general-in-chief who would finally implement the bloody strategy and dramatic campaigns that would bring victory.  At the same time, with the North, cick of the war, Lincoln was facing a reelection battle in which hundreds of thousands of "Peace Democrats" were ready to start negotiations that could leave the Confederacy as a separate American nation, free to continue the practice of slavery.  In his personal life, he had to deal with the erratic behavior of his wife, Mary Todd Lincoln, and both Lincolns were haunted by the sudden death two years before, of their beloved eleven-year-old son, Willie.  1864 presents the man who not only saved the nation, but also, despite the turmoil of the war and political infighting, set the stage for westward expansion through the Homestead Act, the railroads, and the Act to Encourage Immigration.  As 1864 ends and Lincoln, reelected, is planning to heal the nation, John Wilkes Booth, whose stalking of Lincoln through 1864 is one of this book's suspenseful subplots, is a few weeks away from killing him.

The above is excerpted from "1864" by Charles Bracelen Flood. Reprinted by permission of the publisher. All rights reserved.